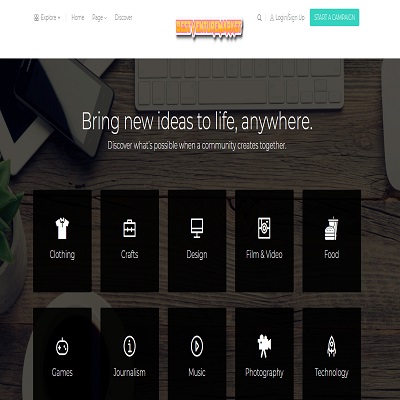 Crowdfunding is the practice of funding a project or venture by raising small amounts of money from a large number of people, typically via the Internet. Crowdfunding is a form of crowdsourcing and alternative finance. In 2015, a worldwide estimate totaling over US$34 billion was raised by crowdfunding.

Although similar concepts can also be executed through mail-order subscriptions, benefit events, and other methods, the term crowdfunding refers to Internet-mediated registries. This modern crowdfunding model is generally based on three types of actors: the project initiator who proposes the idea or project to be funded, individuals or groups who support the idea, and a moderating organization (the “platform”) that brings the parties together to launch the idea.

Crowdfunding has been used to fund a wide range of for-profit, entrepreneurial ventures such as artistic and creative projects, medical expenses, travel, or community-oriented social entrepreneurship projects .

Crowdfunding on the internet first gained popular and mainstream use in the arts and music communities. The first noteworthy instance of online crowdfunding in the music industry was in 1997, when fans underwrote an entire U.S. tour for the British rock band Marillion, raising US$60,000 in donations by means of a fan-based Internet campaign. They subsequently used this method to fund their studio albums. In the film industry, independent writer/director Mark Tapio Kines designed a website in 1997 for his then-unfinished first feature film Foreign Correspondents. By early 1999, he had raised more than US$125,000 on the Internet from at least 25 fans, providing him with the funds to complete his film. In 2002, the “Free Blender” campaign was an early software crowdfunding precursor. The campaign aimed for open-sourcing the Blender 3D computer graphics software by collecting $100,000 from the community while offering additional benefits for donating members.